Check out the latest episode of A Daughter Of Liberty on the Blog Page. Title: The Master Weaver Of Donegal

Meanwhile, I was pleased and honored to be asked to contribute short stories to two major anthologies that will be published next year. The first, "Shadow Boxing With The Devil," will appear in a two-volume set honoring one of the great SF writers of all time, Richard Matheson. Short story number two, "The Monster At World's" End will appear in a two-volume set honoring pioneer SF writer, Joseph Campbell with the publication of a "lost " novel discovered by his estate. Stay tuned for publication dates. 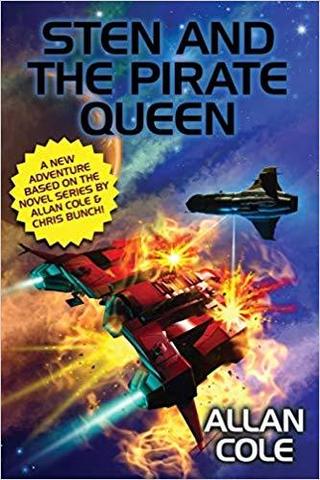 The All Things Sten Page

IT'S HERE: STEN AND THE PIRATE QUEEN. In the typical Sten cliff-hanger ending of Sten And The Mutineers the beautiful and deadly Queen Venatora left our hero sitting at the bar of a spaceport saloon wondering what the clot had just happened when she suddenly appeared, hinted at a tantalizing future rendezvous, kissed him, then vanished.

Here's the publisher's blurb says: With the Empire poised on the edge of war, Sten spearheads the Eternal Emperor’s crackdown on the pirates and traitorous profiteers who are arming his enemies with vital war supplies. A trap is baited to lure the villains into a truel – a three-way duel. Only one thing stands in Sten’s way: Venatora, the beautiful pirate queen he’s grown to love. When it comes down to it, can he overcome loyalty and duty and pull the trigger?

With the publication of Sten And The Pirate Queen, the number of Sten books has grown from eight to ten – not counting companion works like the Alex Kilgour Joke Book and The Sten Cookbook. When my late partner, Chris Bunch, and I came up with the series we envisioned it as twelve books. As time went by we worried that the series was starting to sprawl – wandering away from the central point.

I think we were right in our original decision, but after many years of reflection I saw an opportunity to add to the Sten oeuvre and to flesh out the run up to the Tahn War, which very nearly destroyed the Empire. Although Sten readers know that in reality it wasn’t the war that did most of the damage, but the conniving politicians on the homefront who are busy sharpening their knives while the Eternal Emperor’s back is turned and he is concentrating on the war at large.

To that end, I introduced Lord Fehrle, who is a major player in Sten #4 (Fleet Of The Damned) to Sten #5 (Revenge Of The Damned.) I fleshed out some of his strength and flaws and gave the readers an early peek into the nature of the Tahn culture.

I have two more Sten novels planned. These will take place between Sten #3 (The Court Of An Thousand Suns) and Sten #4. Tentative title of the next book: Sten And The Unauthorized War.

Stay tuned to see the shenanigans the pols at home are up to while their boss is occupied with waging war.