A Daughter Of Liberty

New Life In The Wilderness 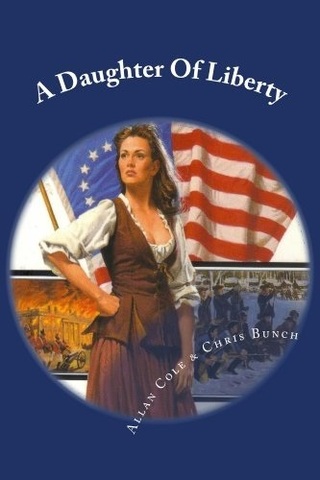 
JAMES EMMETT SHANNON was born on the Second Sunday after Epiphany. Attending at his birth were Ruth Conners and the spirit of Abigail Fahey.


As Diana grew closer to term, Ruth became more and more nervous. There was no midwife in the valley. Ruth was appalled that Diana mostly ignored her advice. Her midwives in Boston had advised her to eat heavily. Diana insisted on staying close to her normal diet—but she spread her meals out over the entire day. She ate as many vegetables as possible, and trimmed most of the fat from the boiled bacon that was a winter mainstay. Ruth thought Diana was being childish . . . and not a little irrational.


Ruth threw a real tantrum when Diana refused to go into "lying in" for her final weeks, but without influencing Diana. The baby, Ruth muttered to her husband, might well be born deformed from Diana's exercise.


Diana's contractions started just after dawn that Sunday. Ruth shouted the men out of the house. Until the child was born, no man would be allowed inside. She put a knife under Diana's bed to cut through the pain, and opened all the drawers and doors to ease delivery. Then, usefully, she heated water and warmed flannel cloths. Diana was concentrating on three thoughts—that if she'd known how much it hurt, she would never have let that damned Emmett near her; to breathe as deeply as she could, like Gramer Fahey said; and finally, to imagine the old woman present in the room. Abigail had told her a woman who trusts her midwife will have an easier delivery than one who's afraid.


Diana was very afraid. Ruth offered rum. Diana wanted it to numb the pain, but she heard the voice again, Gramer Fahey: "Drink may be the Devil's curse or God's blessing. But it does not belong in the hands of midwife or birthing woman until after the child is born."


Her water burst and the contractions and pain piled closer and higher, like wind-driven snow. Diana came in and out of sweating agony to feel Ruth's hands on her, massaging, as Diana had directed.


The pain swept up, and the bloody, tiny red head pushed forth. It was a normal delivery—or so Ruth said. And an easy one, she continued later. She had done as told: washing the baby, cutting the umbilical cord, and cleaning the bed. She even went to the extent of rolling the exhausted Diana aside to put on fresh linen. Grudgingly, she'd even put the child into a loose wool garment Diana had woven, instead of binding it tightly.


Diana held the infant in her arms and looked down at the tiny, perfectly formed boy. The infant was so beautiful, she cried—but only a little, out of happiness.


James Emmett had too many parents. Ruth fretted over him from the time he woke, squalling and filthy, until he slid off to sleep. Was the baby in a draft, or too close to the fire? Did he have too many or too few blankets when he was asleep? Were his eliminations proper and sufficient? Diana wondered how Samuel and Mary had survived at all, let alone lived through the usual childhood ailments.


The men treated the infant as something marvelous and probably quite breakable. Farrell became his caretaker. Diana had seen mastiffs around newly born children who would sit from dawn to dusk inches from the baby, as if it had been given solely into their charge. That was Farrell. Now there was less talk about Brian. Farrell and the baby had long conversations. Mostly they were about what Farrell planned to show James Emmett when he got older, or how he would teach him to do numbers. And letters.


Diana, again to Ruth's shock, insisted on getting up as soon as she could. Gramer Fahey: "I know not why, but women who stay abed are apt to be taken off with a fever. Perhaps there are fluids we do not know of that need to be eliminated and will remain inside the body if it's not stirring about."


It may have been winter, and the fields frozen, but the Shannon farm was busy. Moses and Aaron had gone a-raiding down the valley. Any unburnt or reusable planking had been snaked back by a team of oxen to the farm. Isaac had busied himself building a second stone fireplace at the opposite end of Emmett's fine-drawing original, and replacing the sagging roof beams. Isaac planned on building an entire new wing onto the house when the weather permitted. Moses and Aaron talked about this late one night, after they'd retired to their sleeping quarters.


"So here we are, slaving—I beg your pardon, brother— away on a farm that's to be abandoned come spring. Or so the white folk keep telling us."


"Better than crawling through the wilderness with a bounty hunter behind and a scalping knife afore."


Aaron pulled the fatlamp a little closer while considering how to put his words. Both men spoke in the dry, nasal accents they and their fathers had grown up hearing. "I wonder how many of them will be going back to Boston."


"Isaac for sure and certain. He's bound to let his string run out near the ocean. His wife, most likely. And their children."


"So the widow will stay. With that babe."


"She has said anyone who has not land is doomed."


"Land!" Aaron snorted. "This is the desert of Sinai. With Indians instead of locusts."


"None of this matters to us, brother. Come the summer, we will travel."


Aaron nodded agreement. Then he blew out the lamp and rolled into his blanket.


Diana sought them out a week later. Without preamble: "I have made my mind up. I will not be going to Boston."


"What Mister Conners is to do is what he shall do. There's no place for me in Boston. What I have is here."


No, Diana thought to herself. No, it is not. It's just that the other devils I have yet to meet appear far larger. "I wanted to tell you two men first."


"Because I wanted to make you an offer. You said you would travel for Canada in the summer. That will be a dangerous road. If you're of a mind, you could stay here. In Cherry Valley."


"As runaway slaves? Waiting for the first slave taker? And you are chancing the law. There's penalties for harboring us."


"I don't think any slave takers in hot trod will come to Cherry Valley," she said.


"So we stay?" Aaron said. "To work your land? In Canada there is land for the taking and holding."


"Work my land? Yes. And the land of Mister Bishop. Or any of those who fled, if you're a mind to. The land is good. I have seed for the planting."


"Then I will testify that you are free blacks, known to me from Easton. You sought me out at my parents' behest. Not that I expect many of them to return, at least before the war ends."


"Would you put that in writing?" Moses asked. "Although we could be fooled. Our master did not find it good that we should learn to read."


"I will do that. And ... if and when the men come back to Cherry Valley, you will be able to read those words."


Aaron spoke for them both. "I do not think things will work out that simply, Missus. People who hang a man on suspicion don't trouble themselves about a piece of paper."


Before Diana could say anything, Aaron continued: "But I am of a mind to accept. Cherry Valley we know. Canada we do not. If we are to go there, I would rather look for land to farm in the peace." He flashed a smile. Diana was relieved, especially after Aaron told her of the conversation of two weeks earlier, and the exactly opposite conclusion they had reached. Aaron shrugged when she thanked them for the change of heart.


"It probably did not matter which way the toss fell," he said with a grin. "The redmen will kill us all in our sleep before summer anyway."


Diana laughed. Now she had to tell Ruth.


"Weeks ago, when I said that once in Boston we would have to find a priest to properly christen James Emmett. And you looked at me like I'd suggested we should go to Rome to have the baby baptized. Diana ..." Ruth's tone became pleading, "understand, I cannot stay here. Every night I lie there, listening for the screams again. You are very dear to me. As are the boys. But I have two of my own I must care about."


By summer the house was double-storied, and the addition was framed and boarded. All that remained was shingling the new roofs and putting in the doors. Moses and Aaron were confident they could find enough unshattered glass so it wouldn't be necessary to use scraped hide for the windows. The fields were ploughed and seeded.


Fort Alden was being abandoned. The Sixth Massachusetts was under orders to join a new campaign against the Indians, to rip the heart out of the Indian nations. Five thousand men, under General John Sullivan, had been ordered to prove to the Iroquois that compared to white men, they were mewling babes when it came to burning, murder, and desolation. The campaign would be under the direct command of General George Washington.


"We go when the soldiers go," Ruth said. Isaac could find no more excuses to remain. He'd even built a steep stairway to the upper story, with rope handrails and elaborate knots that he said were like a ship's companionway.


Tears and farewells . . . and the wagon and its three people joined the middle of the military column as it marched off, on the track back toward Albany. Samuel and Mary waved until they rounded a curve and were lost to sight.


Diana sat for several hours, staring after them. She felt she had done right in staying here. But Cherry Valley felt very, very empty.


NEXT: THE SHANNONS FIGHT FOR THEIR LIVES
Be the first to comment